Deciding a Track Plan Before Building Your Model Railroad Layout 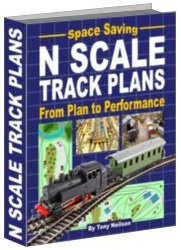 When planning construction of a model railroad there are all sorts of possible track configurations and plans to consider. It really depends on the space you have at your disposal and what type of train operation you would most enjoy.

Real railroads (prototype) run from one destination to another rather than go around in a circle. In reality, real railroads usually have hundreds, if not thousands, of miles of track to work with. Even in a scaled down form, most model railroads lack the space to fully replicate this, so a degree of adaptation and compromise is usually required.

Full size trains often run for long stretches over monotonous landscape, which if reconstructed on a model layout, would be rather boring. To give you an example, the Ghan Train in Australia, runs 1,880 miles across mostly barren desert. Imagine replicating that on a scaled down model railroad – it would probably stretch from one end of town to the other!

The main line begins at one point, and travels to another point, and stops, hence the term – a point to point railroad.

To make things a little more practical (and interesting), prototype railroads have branch lines, sidings and other subsidiary systems. Adding these to a model layout can be a good idea.

Before departure, the trains are turned around at terminals using yards, loops, wyes, and turntables. A single or double-track main line usually stretches from point to point.

When planning your point-to-point layout, you might want to include switches and yards at one end of the layout, and a turnaround at the other.

Most small layouts would not have enough space for two terminals, so use an “out-and-home” track configuration. An out-and-home layout accommodates only one terminal and is like a point-to-point layout double backing. The train journey would start at the terminal and it would pass through various landscapes, possibly a small town, and eventually arrive back at the same terminal.

Some might say it is cheating, but unless you have unlimited space (and money) for your layout, a little compromise is usually required.

Constructing an out-and-home layout usually enables a little more mileage between terminals. The train will still arrive back at the terminal in a reasonably short space of time.

You could add more realism and interest by combining an out-and-home, and point-to-point, format with continuous pikes. You would need a fair amount of space though.

Many model railroaders prefer a continuous layout because it allows for varied train movements which make operation more interesting.

Whatever track plan you decide, the important thing is to have fun.